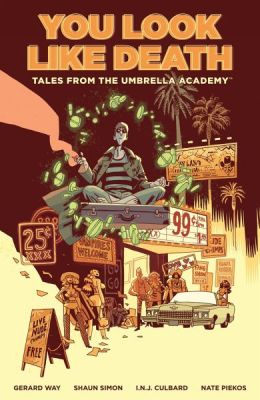 Umbrella Academy creators Gerard Way and Gabriel Bá are joined by Way's Killjoys cowriter Shaun Simon (Collapser, Electric Century) and artist INJ Culbard (Everything, At the Mountains of Madness), for a supernatural adventure featuring the breakout character from the hit Netflix show, which returns for a second season in 2020!

When 18-year-old Klaus gets himself kicked out of the Umbrella Academy and his allowance discontinued, he heads to a place where his ghoulish talents will be appreciated--Hollywood. But after a magical high on a stash stolen from a vampire drug lord, Klaus needs help, and doesn't have his siblings there to save him.

Collecting issues #1-#6 of the first Umbrella Academy spinoff miniseries, with a foreword by Robert Sheehan, portrayer of Klaus in the hit Netflix series!