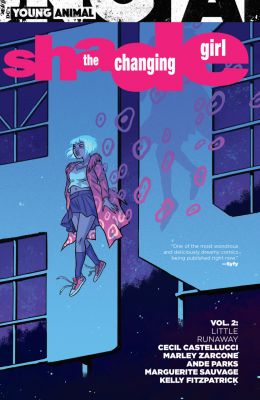 Brand-new from the DC imprint DC's Young Animal, go along for a wild and psychedelic ride in SHADE, THE CHANGING GIRL VOL. 2: LITTLE RUNAWAY—the latest chapter in the radical reimagining of one of comics' craziest characters: Shade, the Changing Man. There's one lesson that Shade is taking to heart. Once she was known as Loma, a native of the planet Meta. Then, using the power of her stolen Madness Coat, she warped into the body of an all-American mean girl named Megan Boyer. Now, with the authorities of her homeworld in hot pursuit, she's ditching the hellish halls of secondary education for the ultimate in freedom—a cross-country road trip.

From the shadowy streets of Gotham City to the atom-blasted sands of Los Alamos to the star-studded hills of Hollywood, Shade's on a quest to discover her own American dream—even if that means using the power of madness to make it a reality. And at the center of that vision is the galaxy's favorite TV show, LIFE WITH HONEY—an Atomic Age comedy whose fading star is about to take on the role of several lifetimes!

Comic: The Unbeatable Squirrel Girl 7 "I've been waiting for a Squirrel like you" (engl.)
Derzeit nicht bestellbar.
7,50 EUR 14,99 EUR