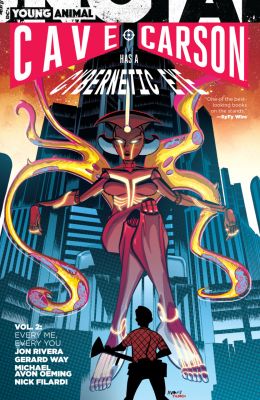 Comic: Cave Carson has a Cybernetic Eye 2 "Every Me, Every You" (engl.)

DC's Young animal presents the mind-bending, modern-day misadventures of DC's classic Silver Age hero continued in CAVE CARSON HAS A CYBERNETIC EYE VOL. 2: EVERY ME, EVERY YOU.

Cave Carson has a cybernetic eye—or more accurately, he had a cybernetic eye. After Team Carson's run-in with the Whisperer and his fanatical cult deep below the Earth's surface, the eye has gone AWOL. But why? What could a cognizant ocular computer be chasing? And perhaps most important, how can Cave and company put it back where it belongs?

Whatever the answers are, the subterranauts better find them soon—because the Whisperer's (very quiet) reign of terror is far from over. Soon his tentacles will cover the entire globe, conquering humanity and paving the way for an extradimensional invasion beyond imagining. Can Cave and his allies—including Doc Magnus and the Metal Men—uncover the truth about his roving eye and stop the Whisperer for good? Or is this really a job for...Superman?!