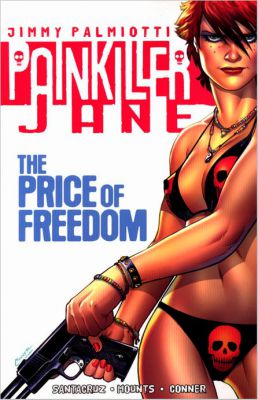 Painkiller Jane is back in action on an adrenaline-filled adventure! Jane is protecting a Saudi Arabian princess visiting New York City, but it seems a number of people want her dead - and the only thing between this bizarre group of would-be killers and her royal highness is our gun-toting, out of control Painkiller Jane! Why has the princess been targeted for death? As a father and son make a shady deal with the mysterious government bounty hunter Churchill, the killers attack - but Jane strikes back with a vengeance. And even as the princess and her protector go on the run, losing themselves in America, a bloody showdown looms on the horizon - and even Painkiller Jane's skills may not be enough to guarantee victory! Collecting PAINKILLER JANE: THE PRICE OF FREEDOM #1-4.