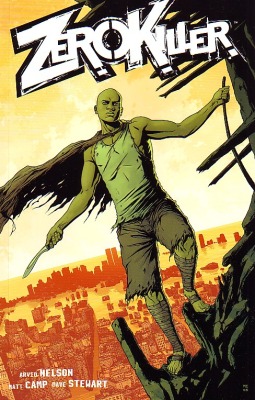 The creator of Rex Mundi presents his vision of a shattered alternate future, as brutal gangs struggle for supremacy in a New York City ravaged by nuclear war and catastrophic flooding. All that remains of the once mighty city are skeletal, irradiated skyscrapers, inhabited by thugs who abide by their own twisted rules. While crime lords vie for power and the amoral paramilitary forces of JOCOM torment survivors of the devastation, one skilled outcast - the mysterious Zero - uses his strength and wits to stay a step ahead of everyone. Working for anyone while pledging allegiance to none, Zero is a bounty hunter who hunts the dregs of a ruined society, saving some innocents in the process. When a mission from a mysterious overseas organization is offered to him, Zero sees it as a ticket out of New York to the mythical promised land of Africa - but he's going to have to face some gruesome ghosts from his past first!