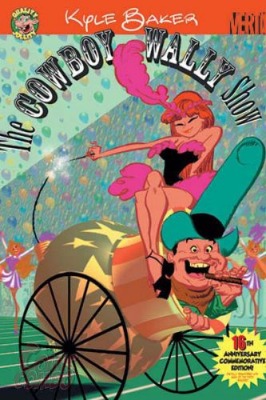 
Considered a cult classic (at least that's what it says on the back cover) from the artist who went on to write and draw the highly praised Why I Hate Saturn, The Cowboy Wally Show consists of four chapters. "The Cowboy Wally Legend" is our introduction to this overblown mockery of a film star; "Sands of Blood" and "The Making of Hamlet" are two crazy attempts at film; and "Cowboy Wally's Late Night Celebrity Showdown" is his final moment of television glory. This will appeal to fans of trashy television talk shows.