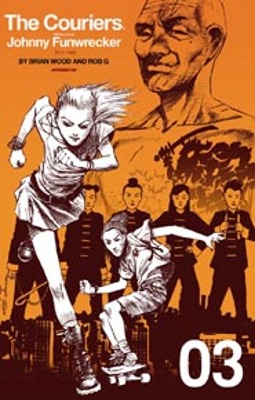 Comic: The Couriers 3 "The Ballad of Johnny Funwrecker" (engl.)


Book Three in the COURIERS saga hits the rewind button on the lives of everybody's two favorite urban mercenary couriers and goes back, way back, to 1993. Moustafa's a dirtbag grunge kid selling weed by the cube at Astor Place and Special's a riot grrrl with a mean streak, looking to carve a place for herself in the criminal underworld. How do these two unlikely partners meet up and become the tight-knit team they are now? Meet Johnny Funwrecker, the hilarious larger-than-life Chinatown mob boss and role model for little street rat hooligans all over. Wood doesn't scrimp on the action and humor in this origin story, and artist Rob G kicks out his own hometown anthem, drawing New York City the way only a true local can.