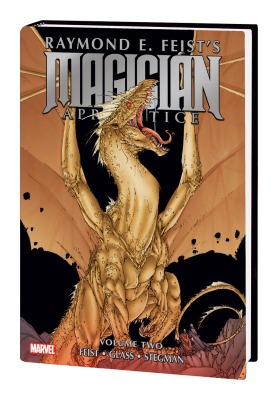 
Adapted from the novel by New York Times Best-Selling author Raymond E. Feist, MAGICIAN APPRENTICE is an exhilarating ride through a rich fantasy world that is hailed by fans and critics alike as "second only to the 'Lord of the Rings."
The journey from Crydee to Krondor is wrought with peril, and an ambush by the dark elves known as the Moredhel has decimated Duke Borric's company of men. With the help of the Dwarven Chief Dolgan, what remains of the party must travel through the mines of Mac Mordian Cadal to find a new path to their destination. But the mines are anything but safe, and Tomas will discover something in them that will change his own path forever... Collecting MAGICIAN APPRENTICE #7-12.