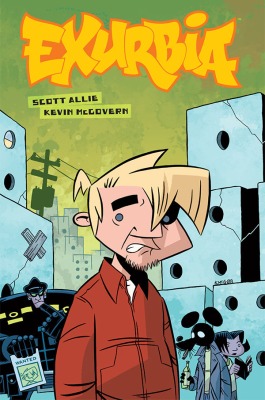 
Gage Wallace's day seemingly couldn't get any worse. After breaking up with his girlfriend, he finds himself framed for blowing up his apartment building -- the latest in a string of deadly bombings in this doomed suburb. After the neighboring Fat City fell into the river during an earthquake, these hapless exurbanites have been waiting for their own town to sink. The only glimmer of hope is a talking rat, whose drunken ramblings are taken as the prophecy of a better time ahead.

Now Gage finds himself being pursued by well-intentioned friends, bored cops, and the bloodthirsty Bald Suzie, a local firearms enthusiast whose brother was killed in a recent explosion.

Written by Scott Allie, editor of Hellboy, Buffy the Vampire Slayer, The Umbrella Academy, and The Goon, with dynamic art by newcomer, Kevin McGovern.