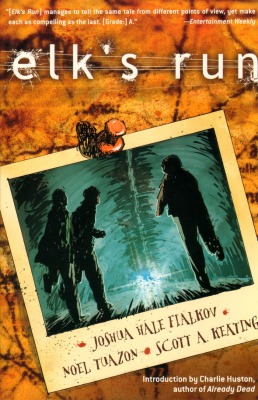 The town of Elk’s Ridge, West Virginia, was built on a dream: The dream of war-scarred Vietnam veterans to live in peace and harmony, in a place untouched by violence, crime, corruption, or greed. A living Norman Rockwell painting, governed by the most basic values and free of all things considered undesirable by its founders. It was supposed to be paradise. And for a while, it was.

Over the years, some in Elk’s Ridge have grown restless. They fear their refuge has become a prison . . . or a tomb. And they yearn to do the forbidden: escape. But when one desperate bid for freedom ends in a tragic accident, a heinous act of mob justice suddenly tears the idyllic mask from this promised land and the evil its residents sought to keep out blooms from within. Now, as a deadly chain reaction of events threatens the future of Elk’s Ridge, its elders gird for battle against the real world. And a group of terrified teens prepare to make their own stand–against the people they once trusted and the only life they’ve ever known. Because there’s nothing left to do but fight or die.

A chillingly lyrical tale, rendered in starkly beautiful, visceral artwork, Elk’s Run is an unforgettable and unrelentingly powerful graphic novel event not to be missed.

With an introduction by Charlie Houston, author of Already Dea.