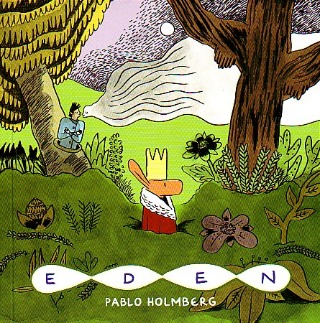 A quiet, whimsical world from an Argentinian newcomer

Argentinean artist Pablo Holmberg creates a bucolic, medieval folktale in Eden, where nature is the protagonist and characters are the scenery. Follow a king as he converses with the moon, a star as it is born, and many more in four-panel strips that combine the playfulness of a Sunday comic with the simplicity of a haiku. Surreal yet friendly and approachable, each strip celebrates the thrill of being alive and encourages the reader to do the same. Eden is Holmberg’s chimerical cosmos where the author’s imaginative storytelling is purposely reliant on the reader’s interpretation.

In this playful new collection of comic strips that were originally syndicated on his website, Holmberg reinvents the comic strip convention by emphasizing situations and natural landscapes rather than personalities and human interaction.