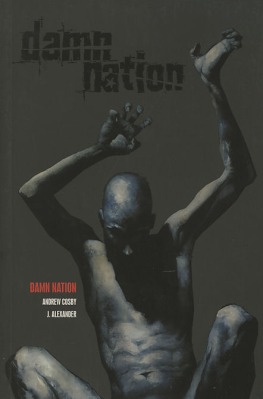 From the creator of UPN's Haunted and the Sci-Fi network original series Eureka comes one of the most ambitious and horrifying tales ever committed to the comics page!

Writer Andrew Cosby has imagined a United States shut off from the world by concrete barricades and barbed wire-not because of what might get in, but what might get out. A vampire plague has spread from sea to shining sea and when a small holdout of scientists trapped outside of Buffalo, N.Y. discover a cure, it's up to a Special Ops team from the President's current offices in London to go in and get it. Yet, not everyone in the world wants to see America back in the saddle again ...

• The stunning painted artwork of Eisner Award-nominee J. Alexander (Queen and Country) earned the first issue of Damn Nation the honor of Cover of the Month by Wizard Magazine. With Alexander's atmospheric visuals, Cosby crafts a vampire thriller with surprises under every manhole cover and the dark truth that not all monsters fear the sunlight.