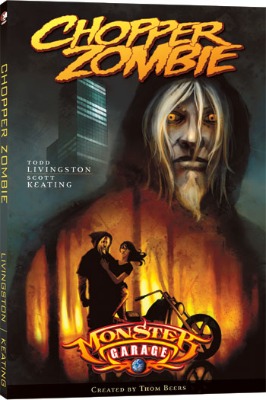 Sometimes it takes dying to really live!  When a motorcycle builder refuses to sell his innovative fuel formula and engine design to a greedy corporation, he is murdered and his inventions are stolen! But what he died for also brings him back to life when he is drowned in his own fuel and he returns as a zombie -- giving him the skills and confidence to exact revenge and claim what is rightfully his! The Producer of MONSTER GARAGE and DEADLIEST CATCH and the writer of THE BLACK FOREST bring you the evolution of horror with CHOPPER ZOMBIE!

CHOPPER ZOMBIE will be promoted on television during the airing of new episodes of MONSTER GARAGE!