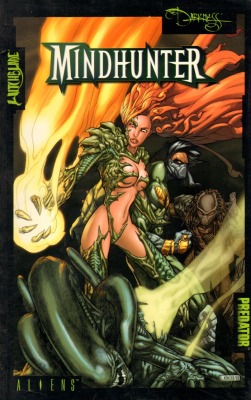 Jackie Estacado, a mob hitman possessing a mysterious, malevolent force known as the Darkness, and New York Police Detective Sara Pezzini, wielding an equally mysterious weapon, the Witchblade, are abducted and trapped in a realm of illusory violence and bottomless time. Forming an unsteady alliance, they rip through layers of false realities to discover that they're imprisoned on a huge, living spacecraft high in Earth's orbit -- an ever-changing prison ship controlled by the mind of a madman. Their fellow inmates? Swarms of Aliens and a female Predator with a jones for the Witchblade's power! How could things be worse? Throw a Darkling/Alien hybrid in the mix! Collecting the three-issue series.