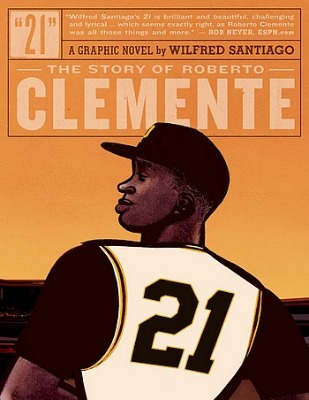 No other baseball player dominated the 1960s like Roberto Clemente and no other Latin American player achieved his numbers. Born in 1934 in Puerto Rico, Clemente excelled in track and field and loved baseball. By the age of 17 he was playing in the PR Winter league. Spotted by the big-league scouts because of his hitting, fielding, and throwing abilities, he joined the Pittsburgh Pirates in 1954. A fierce competitor, within two seasons he was hitting above .300 consistently. He played like a man possessed, fielding superbly, unleashing his rifle arm, and hitting in clutch situations. Despite his aesthetic brilliance, he faced prejudice throughout his career and was given his due only after his unexpected and tragic death in a 1972 plane crash.

Although baseball was his obsession, Clemente never lost sight of his dreams and his greater responsibilities outside the game. This sense of urgency is what came to define him beyond that of a grand athlete. His eventual success and accompanying celebrity gave him the opportunity to engage his conscience in public life. He died when his plane went down in the Caribbean Sea on a relief mission to earthquake-torn Nicaragua that he personally directed.

21 chronicles Clemente’s life from his early days growing up in rural Puerto Rico, the highlights of his career (including the 1960s World Series where he helped the Pirates win its first victory in 33 years, and his 3000th hit in 1972 during the last official at-bat of his life) as well as his private life and public mission off the field.

After his death, Major League Baseball declared September 18 to be “Roberto Clemente Day,” and in 1999, Pittsburgh’s Sixth Street Bridge was renamed the Roberto Clemente Bridge in honor of the greatest Latino ballplayer in history.

Wilfred Santiago captures the grit of Clemente’s rise from his impoverished Puerto Rican childhood, to the majesty of his performance on the field, to his fundamental decency as a human being in a drawing style that combines realistic attention to detail and expressive cartooning.