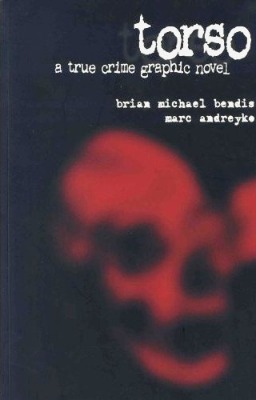 Bendis Strikes Again! Cleveland. 1935. Eliot Ness, fresh from his legendary Chicago triumph oer Al Capone and associcates, se his sights on Cleveland. He went on a creusade that matched, and sometimes even surpassed, his past accomplishments. But dismembered body parts started washing up in a concentrated area of Lake Erie Sound. Headless torsos that left no clues to their identity or reason for death. Eliot Ness and his colorful gang of THE UNKNOWNS chased this killer through the underbelly of Cleveland for years. As far as the public ws concerned, he was never captured. But what really happened is even more shocking. This award winning series is finally collected into this handsome edition. Also included is material never seen before and a photo essay of the actual murders.

About the Author:
Brian Michael Bendis is the EISNER award-winning creator (The Comic Industry’s Oscar) of several crime graphic novels published by Image Comics. His other Image works include TORSO, GOLDFISH, JINX, and FIRE. Fortune And Glory, his Hollywood tell all from Oni Press, was given an "A" by Entertainment Weekly. He is also the recipient of the Cleveland Press Excellence in Journalism Award.

Marc Andreyko has been living in Los Angeles for nine years and believes that he is now officially a Californian. In addition to enjoying the snow-free environs of the City of Angels, Marc writes all sorts of stuff. Here are some highlights.
The Lost, Harvey-nominated and legendarily unfinished revisionist sequel to Peter Pan w/ co-creators Jay Geldhof and Galen Showman
An Eisner and Harvey award winning Dr. Strange one-shot with pal P. Craig Russell.
Translating the opera Pagliacci (also with PCR) for Pagliacci: The Clowns

from Dark Horse.
Various issues of Wolverine, Blade, Shadows and Light and the Supernaturals (with Ivan Reis) for Marvel Comics.
Masks w/ Richard Corben, Black Sun for Wildstorm and a sadly unpublished revamp of THUNDER Agents for DC Comics.
Recently, Marc has done Castlevania: The Belmont Legacy for IDW, Casefiles: Sam and Twitch for TMP/Image and his personal pride and joy: Manhunter

, co-created with the amazing Jesus Saiz, currently published by DC Comics.
He's also written some screenplays, pilots and has had director David Fincher (Seven) and Paramount Pictures sign on to do the film version of Torso

, which he co-authored with comic book heavyweight Brian Michael Bendis.