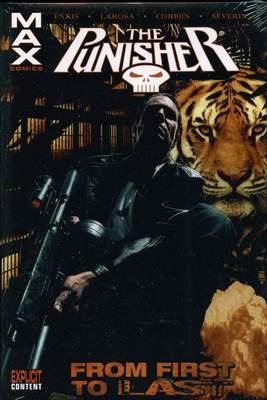 Comic: The Punisher "From First to Last" (engl.)


Three dark tales of the Punisher’s past, present and future. THE TYGER: As a 10-year-old boy on the streets of Brooklyn, Frank Castle was no stranger to violence. On the eve of his first kill as the Punisher, Castle remembers a far-off summer filled with fear, intimidation and revenge. THE CELL: Deep in the bowels of Riker’s Island lurk five evil old men, with a secret so terrible that even they can’t begin to comprehend it. But a new inmate has arrived: the Punisher, convicted of a hundred murders, determined to find those five old men no matter what. And finally, THE END: In the near future, in the ruins of a world destroyed by nuclear fire, there is still evil — and so there must be punishment. A dying Frank Castle stalks the mass graves of New York City, determined to carry out one final, dreadful task. Collecting PUNISHER: THE TYGER, PUNISHER: THE CELL and PUNISHER: THE END.