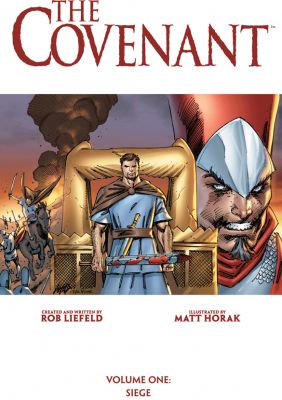 In ancient times there was no weapon more devastating than The Ark of The Covenant, containing a power that collapsed enemy nations and destroyed hostile invaders. The Philistine army, led by General Thane, seeks to crush the Israelites as they populate the surrounding territories. A bold move on the field of battle robs the Israelites of their mythical weapon, empowering their most deadly enemy. A young priest, Samuel, determines to steal back the Ark and assembled a group of mercenaries to aid him in the most daring raid in history. An untold tale of the Bible that shifted the balance of power in history. Collects THE COVENANT  #1-5.

The legendary Ark of the Covenant has laid waste to entire armies. Now, it has been raided and stolen, ripped from the field of battle by the terrible Philistine forces. THE COVENANT tells the story of Samuel, the last Judge of Israel, and his fight to retrieve the Ark of the Covenant from the clutches of the Philistine nation. Collects THE COVENANT #1-5 - See more at: https://imagecomics.com/comics/releases/the-covenant-vol.-1-siege-tp#sthash.ccrkG2Hp.dpuf
Diesen Artikel haben wir am 05.09.2016 in unseren Katalog aufgenommen.