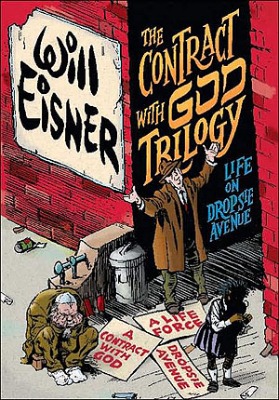 
With graphic narrative that "was closer to the writing of Bernard Malamud or Isaac Bashevis Singer than any comic art which had preceded it" (The Economist), A Contract with God, originally published in 1978, was the first graphic novel: the prototype—along with A Life Force and Dropsie Avenue—for such seminal works as Maus and Persepolis. Set during the Great Depression, this literary trilogy, assembled in one volume for the first time, presents a treasure house of now near-mythic stories that fictionally illustrate the bittersweet tenement life of Eisner's youth. With nearly one dozen new illustrations and a revealing brand-new foreword, this book ultimately tells the epic story of life, death, and resurrection while exploring man's fractious relationship with an all-too-vengeful God. This mesmerizing, fictional chronicle of the universal American immigrant experience is Eisner's most poignant and enduring legacy.