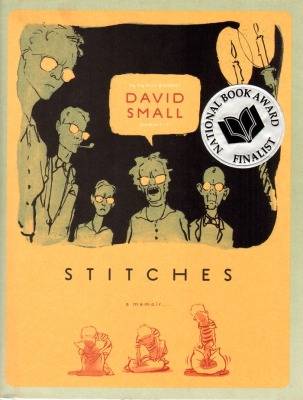 Finalist for the 2009 National Book Award and finalist for two 2010 Will Eisner Comic Industry Awards: the prize-winning children’s author depicts a childhood from hell in this searing yet redemptive graphic memoir. One day David Small awoke from a supposedly harmless operation to discover that he had been transformed into a virtual mute. A vocal cord removed, his throat slashed and stitched together like a bloody boot, the fourteen-year-old boy had not been told that he had cancer and was expected to die.

In Stitches, Small, the award-winning children’s illustrator and author, re-creates this terrifying event in a life story that might have been imagined by Kafka. As the images painfully tumble out, one by one, we gain a ringside seat at a gothic family drama where David—a highly anxious yet supremely talented child—all too often became the unwitting object of his parents’ buried frustration and rage.

Believing that they were trying to do their best, David’s parents did just the reverse. Edward Small, a Detroit physician, who vented his own anger by hitting a punching bag, was convinced that he could cure his young son’s respiratory problems with heavy doses of radiation, possibly causing David’s cancer. Elizabeth, David’s mother, tyrannically stingy and excessively scolding, ran the Small household under a cone of silence where emotions, especially her own, were hidden.

Depicting this coming-of-age story with dazzling, kaleidoscopic images that turn nightmare into fairy tale, Small tells us of his journey from sickly child to cancer patient, to the troubled teen whose risky decision to run away from home at sixteen—with nothing more than the dream of becoming an artist—will resonate as the ultimate survival statement.