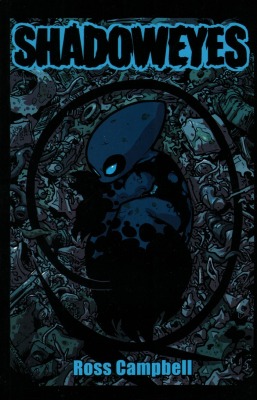 In the futuristic, dystopian city of Dranac, moody teenager Scout Montana is an aspiring vigilante, but her first attempt to beat up a mugger is halted when she's hit in the head with a brick and knocked unconscious. When she awakens, she discovers that she's able to transform into a strange, blue, clawed, superhuman creature! In this new body she becomes the vigilante Shadoweyes... but, she's unable to return to her human form, and is lured into a homeless superheroic life on the streets by her inhuman appearance - forced outside of society yet still bound to it. Scout's new life as Shadoweyes is just getting started!