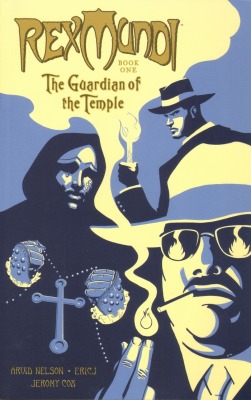 Comic: Rex Mundi Vol. 1 "The Guardian of the Temple" (engl.)


A quest for the Holy Grail unlike any you've ever seen begins here--in a world where the American Civil War ended in a stalemate, the Catholic Church controls Europe, and sorcery determines political power!
When a medieval scroll disappears from a Paris church, Doctor Julien Saunière investigates, uncovering a series of horrific ritual murders and an ancient secret society. Julien cannot let these shadowy figures retreat into the darkness, lest they take up their killing once again. His investigation turns into a one-man quest into the bizarre secrets of the Catholic Church.

Mystery, fantasy, history, and horror combine to create this critically acclaimed comic. This is the volume where it all begins for anyone interested in a literary adventure that'll challenge their mind as much as it chills their bones!
Rex Mundi is the first part of a Dark Horse program being launched with writer Arvid Nelson.
Collects issues 0-5 of the Image Comics series.