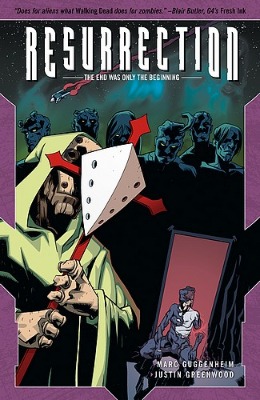 Comic: Resurrection Vol. 2 "The End Was Only The Beginning" (engl.)

RESURRECTION VOLUME 2 collecting issues 7-13 of the critically acclaimed series by Marc Guggenheim (Amazing Spider-Man, the Green Lantern movie) and Justin Greenwood! This is the comic that picks up where all alien invasion movies leave off: The aliens are gone and the invasion is over... but what is to become of humanity? President Bill Clinton and a ragtag group of survivors are faced with that question as they encounter a city of people untouched by the alien occupation... because they worship the aliens as gods. Spider-Man) and featuring moody art from newcomers David Dumeer and Douglas Dabbs, this book picks up where all the other alien invasion stories end.