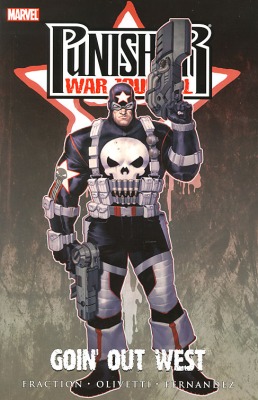 
Can one man stand against an army fueled by pure hate? With recent tragedies still rattling in his head, Frank Castle finds himself tied to a fencepost with barbed wire, watching what may be his last sunrise. Somewhere along the U.S./Mexico border, a super-militia bent on igniting a race war has been killing scores of innocent people. By the time the last shot is fired and the last body falls, you’ll have met the modern incarnation of the Hate Monger and seen an all-new look for the Punisher. Meanwhile, in Washington DC, someone wants to have words with Frank about his recent patriotic costume change: the Winter Soldier himself, Bucky Barnes! Collecting PUNISHER WAR JOURNAL #5-11.