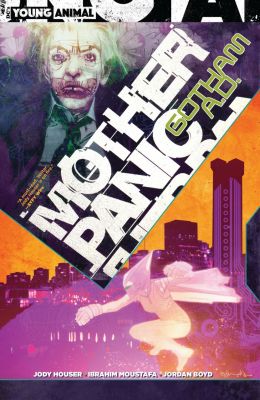 After the fallout of Milk Wars, Violet Paige finds herself in a Gotham City unlike any we have seen before...a Gotham City without Batman. From DC's Young Animal, the offbeat, grassroots mature-readers imprint spearheaded by Gerard Way.

Ten years into the future, in a world without a Batman, Gotham City has been taken over by the Collective, with Gala acting as Head of Citystate. In a high-tech town with zero tolerance for caped crusaders and masked vigilantes (except for those designed by Gala and her association of aristocratic artisans), what's a woman who has vowed vengeance to do? And what's happened to her mother, Rebecca Paige? Perhaps The Joker, now a sad clown who makes balloon toys shaped like tommy guns and machetes on the abandoned Gotham docks, has the answers. Find out for yourself as Mother Panic returns to a different Bat-time, different Bat-channel.