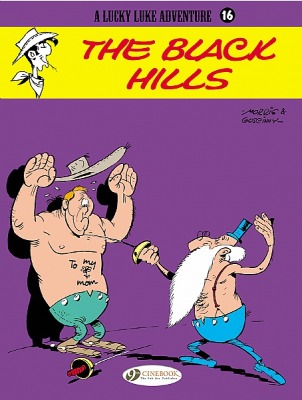 The Senate decides to settle the fertile land of Wyoming. Before moving in the settlers, they send a committee of four scientists, led by Lucky Luke, to survey the territory. One senator is strongly opposed to this project and determined to sabotage the expedition. However, the Senate overlooked one important fact: the land territory is home to the Cheyenne Nation, who are determined to defend their land. Now,I’ve not seen all of the Lucky Luke’s published by Cinebook but those I have I thought I’d given good reviews of? But people keep saying I hate the book! Thing is,I can remember when Lucky Luke was in Film Fun [1960] and then Giggle [1967] as Buck Bingo! What can you say about a character or book series that have been around since the 1940s?  It has to be good and popular to survive that long.  The Black Hills is no exception. As for the expedition of observers that LL has to guide around the only thing I can say is that the Cheyenne had the right idea! [you’ll need to read the book to know what I mean].

Fun for youngsters of all ages!