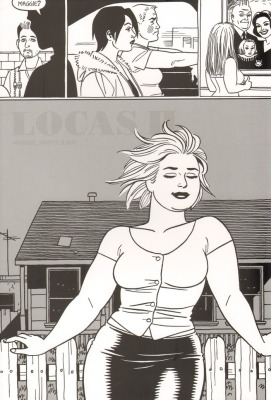 
This second omnibus volume of "Locas" tales by Jaime Hernandez - collecting over a dozen years' worth of stories from the award-winning Love and Rockets comics - picks up shortly after Maggie and Hopey's long-awaited reunion at the end of the Locas hardcover. Even though her love life remains chaotic, Hopey takes her first steps toward responsible adulthood with a real job, while divorced Maggie manages a fleabag apartment building, where she continues to wrestle with the demons of her past - especially in the stunning graphic novel-length "Ghost of Hoppers" with its hallucinatory dream finale. Ray, still in love with Maggie, hangs out with the bombshell "Frogmouth," whose ties to local thugs causes trouble. Of course, Maggie, Hopey and Ray's paths continue to intersect in Jaime's increasingly complex, always richly imagined world, along with those of characters both old (Izzy Ortiz, Penny Century) and new (the jockette Angel, the mysterious superheroine Alarma).