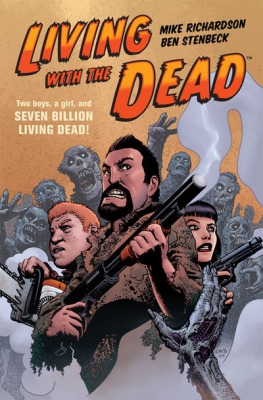 Comic: Living with the Dead (engl.)


Two survivors of a global catastrophe disguise themselves as corpses to survive in a land of the walking dead.

Soon the two friends save a lovely young gun-crazy woman named Betty, who becomes a source of rivalry between them. With hundreds of zombies out for a snack, the three try their best to blend in so as not become the next item on the menu.

From the mind of Mike Richardson, creator of The Mask and The Secret, comes this hilariously frightening tale of Straw and Whip who have lived through a plague that's left the world with seven billion brain-hungry zombies.

* Be sure to catch this heart pounding and hilarious graphic novel with art by Ben Stenbeck, and cover by legendary Richard Corben (Hulk: Banner; Punisher: The End; and Hellboy: Makoma).