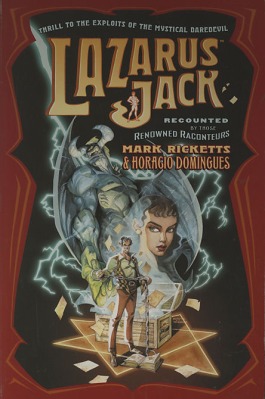 Plagued by an incident that cost him his family, magician Jackson Pierce struggles to reclaim them by embarking on a terrifying, nonstop, dimension-hopping thrill ride. On this journey through fantastic worlds both seduced and devastated by black magic, Jackson undergoes disturbing transformations, falls prey to an insane sorcerer, defies zero gravity, and ultimately confronts the demons from his past.

Mark Ricketts is the acclaimed writer of the graphic novel Nowheresville and the winner of the 2000 Klasky Csupo screenwriting competition. He has been described as ìa powerful storytellerî by Don McPherson of The Fourth Rail and praised for having ìa keen eye for the dark places and a sharp ear for the beat of speechî by 100 Bullets author Brian Azzarello.