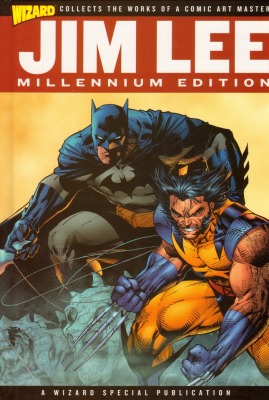 Meet the real Jim Lee in a new exclusive in-depth interview for this book. Behold his "American Dream" story as a child from Seoul, South Korea to a superstar artist in southern California. Find out about his influences and his early days. Learn how he first started to get work at Marvel, to the daring formation of Image Comics, the founding of WildStorm, the return to Marvel for Heroes Reborn, the sale of WildStorm to DC Comics and his smash success of Batman and Superman.

Art fans rejoice and behold a gigantic art gallery of Jim Lee's greatest works, from X-Men to Batman, everything noteworthy will be here. Taken era by era, Lee provides a running commentary throughout the brilliant heights of his career. In addition, Lee unveils a tremendous collection of unfinished/unpublished art along with a sketchbook of seminal design work from Punisher to WildC.A.T.S and a special private section of unseen original pieces. You Must See This!

Get a complete illustrated checklist of every piece of Jim Lee comic art ever published from 1987 to 2004, including hard-to-find items like promotional posters, holiday cards, collector plates and convention program covers.

Go behind-the-scenes with Lee on the Image Comics explosion in 1992. Follow the Image roller coaster from Jim's seat as he developed the red-hot WildStorm, Cliffhanger and Homage lines. Then learn about the background behind the move to DC and get the director's commentary on Lee's historic Batman: Hush issues.

Spend a day with Lee at WildStorm Productions, see him at work on new material and discover the secrets behind the techniques he uses to create his work. Meet his talented creators (AlÃˆ Garza, Lee Bermejo, Scott Williams, Sandra Hope and others) at their drawing tables and find out what Lee wants to do next.

Top it all off with an amazing cover featuring the Batman and you have the ultimate official Jim Lee event that only Wizard could publish!