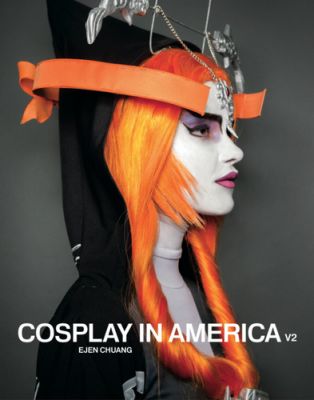 Cosplay is so much more than the final product you see at a convention or in a picture online. For the people who make their own costumes, there are weeks, months, sometimes even years of work put into the final product. That means trips to fabric stores, making nerdy sewing circles, and props being built in small spaces. Yet most of our coverage of cosplay is confined to what we see at conventions.

That’s why I’m so glad Ejen Chuang, a photographer and author of Cosplay In America, celebrates the people behind the costumes in his latest book, Cosplay in America v2.

Cosplay in America v2 begins with a white page where the only text on the page reads, “#CosplayisforEveryone,” and I can think of no better way of summarizing what this book means. Portraits in this book depict new and experienced cosplayers of varying skill levels with different things to say.

Ejen traveled around the country to big and small cities to interview cosplayers while they worked on their craft. Cosplayers speak about posing, using reference photos when buying fabric, dressing up with their parents or partner, and even using a fume hood for spray painting in a small Brooklyn apartment. From there the book explores cosplaying at conventions but still with a focus on the people in the costumes rather than only the costumes. Ejen’s photos show cosplayers helping each other with makeup in hotel rooms, making friends, and doing emergency cosplay repair on the con floor.