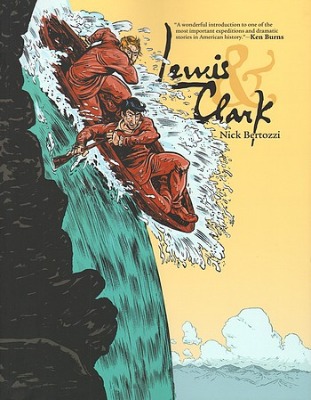 Two of America’s greatest explorers embark on the adventure that made their names—and sealed their fates.

In 1804, Meriwether Lewis and William Clark departed St. Louis, Missouri, for one of the greatest adventures this nation has ever known. Appointed and funded by President Jefferson himself, and led by a cadre of experts (including the famous Sacajawea), the expedition was considered a success almost before it had begun. From the start, the journey was plagued with illness, bad luck, unfriendly Indians, Lewis’s chronic depression, and, to top it all, the shattering surprise of the towering Rocky Mountains and the continental divide. But despite crippling setbacks, overwhelming doubts, and the bare facts of geography itself, Lewis and Clark made it to the Pacific in 1806.

Nick Bertozzi brings the harrowing—and, at times, hilarious—journey to vivid life on the pages of this oversized black-and-white graphic novel. With his passion for history and his knack for characterization, Bertozzi has made an intimate tale of a great American epic.