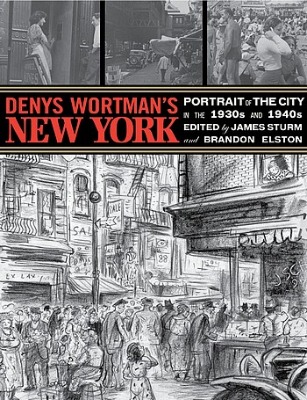 After cartoonist, educator and editor James Sturm discovered the vintage book, Mopey Dick and the Duke, he set off to find more about the author, the deceased and unknown cartoonist Denys Wortman. Sturm immediately took note of the masterful drawings – casual, confident, and brimming with personality and wondered how this cartoonist escaped his radar. After some online sleuthing, Sturm connected with Wortman’s son, Denys Wortman VIII, who relayed that an archive of over 5000 illustrations literally was sitting in his shed in dire need of rescuing. For over 35 years, the illustrations had been fighting such elements as hungry rodents, rusty paperclips and even a blizzard. Wortman VIIII also had drawers full of his father’s correspondences including letters and holiday cards from William Steig and Walt Disney. Original artwork by artists and personal friends including Peggy Bacon, Milt Gross, Isabel Bishop, and Reginald Marsh were also saved. Considering that Wortman’s luminary peers held him in the highest regard coupled with his artistic prowess, makes his absence from both fine art and comics history puzzling. So, Sturm and Brandon Elston set out to create a beautiful tribute to the forgotten master.

Denys Wortman's New York is not only a tribute to Wortman, but it is a tribute to New York, the city that sparked Wortman’s voracious creative output. From coal cellars to roof tops, from opera houses to boarding houses, Wortman recorded the sailors, dish washers, con artists, entertainers, pushcart peddlers, construction workers, musicians, hobos, society matrons, young mothers, secretaries, and students who collectively make New York the city it is.